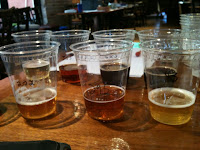 At my last homebrewing club meeting, one of our members prepared a doctored beer presentation.  The purpose of the presentation was to expose club members to the several common beer off-flavors.  The procedure used to present these beer flaws was to "doctor" an American light lager with food-safe ingredients that mimic the flavor of actual beer flaws.  Samples were then passed around and members were asked to describe what they smelled and tasted.  The resulting discussion was mediated and pushed towards what brewing processes could produce the off-flavor and how to correct any problems.

There are several commercial off-flavor kits on the market.  The one recommended by the Brewers Association is a kit called The Enthusiast, made by a company called FlavorActiV.  The kit contains eight different beer off-flavors and ingredients to provide tastings for a medium-sized club.  The Brewers Association offers the kit for sale for $150 for American Homebrewers Association (AHA) members and $200 for non-members.  The Beer Judge Certification Program (BJCP) also offers a discounted kit to its members for $50.

But, homebrewers are nothing if not cost-minded and innovative.  Our club member did some research online and found some doctored beer recipes that use common homebrewer or low-cost ingredients (he said he did not spend more than $10).  Below are the off-flavors that we tasted:

Perception and comprehension of beer off-flavors is critical to being able to correct problems in the brewing process.  This is true both at the homebrewing scale and and the production brewery scale.  Conducting an off-flavor demonstration is a great way to help brewers develop a common "vocabulary" of flavor flaws and it can be a lot of fun.  I highly recommend the Lug Wrench readers give it a try.